specialising in Caravan,4 x4 Off Road Trailer and Off Road Caravan tent repairs...
9280

Brand new caravan cover for total weather protection whilst the interior is still accessible even...
9274

Revamp your camp with a new interior design
9236

New Cover for a BushLapa off road trailer

Guide to Inverters. By Willie Bromehead 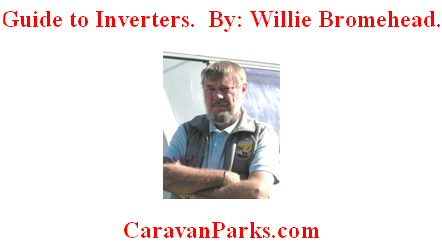 Just think of this! You’re on the road with the entire family; the drive is 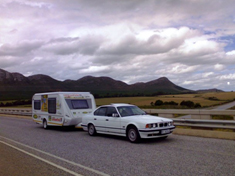 boring and the kids are starting to drive you nuts. Now just imagine for a minute: The kid’s can play their favourite video games or DVD’s while you listen to nonstop music from your radio at the same time. All of this can happen because of a small device called an Inverter!


Please do not think that Inverters are a cheap source of 220 volt power. There are literally hundreds of Inverters available on the market, ranging from the ''cheap'' imported versions, and there are many of them, to purchasing a decent, high quality product. To coin the popular phrase "you only get what you pay for" could not be truer when it comes to Inverters.

It is interesting to note that Inverters are mainly used by people who want to get away from it all.  They use Inverters to convert 12volt DC power to AC mains power for various appliances. Remember one very important rule-just choose the right one. The advantage of having such an energy supplying appliance is that it offers a mains power source in car, caravan, and boat … anywhere there’s a 12 volt battery to run your 220 volt appliance.

An Inverter changes DC power from a battery into conventional AC power that you can use to operate all kinds of devices ... electric lights, kitchen appliances, microwaves, power tools, TVs, radios, DVD’s, computers, and so on. You just connect the Inverter to a battery, and plug your AC devices into the Inverter ... and you've got portable power ... whenever and wherever you need it.

Inverter sizes are specified in WATTS, and range from 50 watts up to 11,000 or more, with the most popular in the 500 to 4000 watt range. Most of the smaller Inverters run off 12 volts DC, but all of the larger ones are designed to run off 24 or 48 volts.
Before you rush out to purchase an Inverter for your needs, we recommend you read this information, as this will help you understand why certain Inverters cost more and others less. This information generally applies to all makes and types of Inverters.

1. The size of the Inverter you require depends on the power in watts (or current in amps) of the appliance or equipment you want to run. You first need to determine the power consumption (WATTS) of the equipment you want to run by referring to the specification plate on the appliance or tool. Alternatively, you can find this information in the appliance manual. You will need to know both the continuous rating in watts or amps of the appliance/s, as well as the peak/surge rating in watts or amps combined (If you intend to run multiple appliances simultaneously). Without this information you will not know which Inverter you will require to install.

2. Inverters are rated in continuous power and peak/surge power that they can supply. Continuous power is the total WATTS the Inverter can support indefinitely while peak or surge power is the amount of power that the Inverter can provide for a brief period, usually when the equipment or the appliance/s starts up. A lot of appliances and equipment may have a start up peak or surge that is far greater than the continuous rating specified.

3. To CONVERT AMPS TO WATTS you need to multiply the equipment or appliance AMPSx220 AC voltage to obtain the approximate WATTS that are required.

a. The conversion of Amps to Watts at fixed voltage is governed by the equation Watts=AmpsxVolts. For example 1 ampx220 volts=220 watts.

b. This means that: if you want to run an appliance with a continuous load of 5 Amps and a peak load of 15 Amps your calculation is as follows:

d. See end of article for an example of how to calculate your needs.

a. Pure or True Sine Wave Inverters provide electrical power similar to the output of your wall plug, (ESKOM power) which is highly reliable and does not produce the electrical noise interference, which may result from use of a modified sine wave unit.

b. Appliances such as microwave ovens and motors run correctly, quieter and cooler.

d. It is recommended not to connect a PC with an Inverter. Use your UPS with the Inverter! An Inverter will not regulate the AC Power.

5. The MODIFIED SINEWAVE INVERTER has greater limitations as opposed to Pure Sine wave. Here are some of the appliances that may experience problems when running off Modified Sine wave Inverters:

a. The main drawback with Modified sine wave Inverters is that some appliances with timing devices, light dimmers, and some battery chargers, as well as variable speed devices may not work well, or may not work at all.

e. Modified sine wave Inverters are usually only protected by standard fuses and they are far more likely to failure and to give trouble.

Most of the smaller Inverters with an output of below 150 watts are available with a cigarette lighter adapter so that you can plug it into your car's lighter socket. Suitable to run DVD players, radios and if a good quality, even your laptop.

Inverters 300W and higher, are supplied with DC connection cables that must be connected direct to a battery.(Not through the cigarette lighter!)

Now comes the interesting part; what size and type of battery should one use?

I have a good quality cigarette lighter Inverter of 110 watt output, and run a DVD player to keep the grandchildren occupied whilst on the road. The DVD player only draws 15 watt, and the 110 watt Inverter is more than adequate. The Inverter only cost about R400.00 and I have been using it for about a year now.

If you are going to use an Inverter for extended periods of time in your motor vehicle, it makes good sense to have an extra deep cycle battery for the Inverter, and cabled to the starting battery. In other words, you should install a dual battery system in your vehicle.

What Capacity of Inverter is going to suite your needs?

Once you are sure that you are looking for an Inverter, it's important to calculate the capacity of the Inverter that will suit your requirement. The following table will give you a reasonable idea about the power consumed by various equipments.
Florescent Tube light-60W
Fan-70W
Television-120W
Laptop-100W
Calculating your power need.

Now I'll explain to you how to use above table to calculate the right capacity Inverter for your requirement. Let's say you need an Inverter to run 2 Tube (florescent) lights, 3 Fans, 1 TV and 1 Laptop computer. As per the table above, you'll need a total power of 550 WATTS (2x60 + 3x70 + 1x120 + 1x100) to support all of your equipments at the same time.

Your Total Power Need will be 550 WATTS to run the appliances given in the above example.
Now that you know how much power is required, it's easy to get the VA rating of the inverter. In ideal conditions, the VA rating would have been the same as the power need i.e. 550VA. Now add about 20 – 25% safety factor.

You will therefore need an Inverter with a 650 – 700 watt output capacity.
Calculating the battery capacity.

Up until now, you have had determined the Inverter capacity required for your need. But the next question is that how much back up will the inverter provide and for how many hours you can run all of your equipments. And that's where battery capacity comes into the picture. It's the battery which determines the amount of hours you can run the equipment. The higher the capacity battery you have, the more hours running time you'll get.

Let's go for, as an example, for an Inverter which can give us back-up running time of up to 3 hours or so for our requirement:

650 Wx3 hours=12VxBattery Capacity
The battery Capacity=(650x3) divided by 12=160 Ampere Hours
So we need a battery of 160 Amp Hours capacity. Based on this calculation, that should be more or less sufficient for your requirement.

What you must remember is: You need to work out first what your requirements are and what appliances you will be running. Then which Inverter is going to suite your needs, whether the Pure Sine Wave or Modified Sine Wave Inverter you that want to use, and then your budget!
I hope this article helps you in some way in making the right decisions.

After being stuck at home for so long, this is what the soul needs.
9785 The Etosha Village Camp Site is nestled in the spectacular green and gold Mopani forests surrounding Etosha National Park. Each of the 4 Individual campsites is equipped with its own toilet and shower facilities, power outlets, running water, lights and a barbeque facility.
9783 Vital Protection AM2 220ml Spray-on Insect Repellent.Effective for up to 3 Months or 30 Washes.
9781 The Maputo Elephant Reserve is located 80km south of Maputo.
9778 10 romantic ideas for your special someone
9777 Did you hear the great news?!We are happy to let you know that Berg River Resort is open to the public!!!
9776 #Mountainbiking is a must-do activity at Gecko Rock, even if you just bring the bikes along for a social ride on a camping #weekend.
9774 Come and burn off your Covid lockdown frustration!
9772 Vast open plains, salt pans and the main wildlife concentrations are found in the tourist areas in the northern sections of the park.
9769